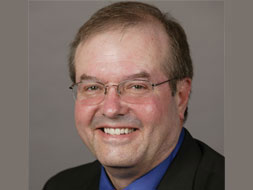 “My master’s degree in computer science made such a difference to me at Microsoft. I’m happy to have the stock to donate to a scholarship in honor of Dr. Mims.”

Bill Hoffman credits Dr. Ted Mims, Emeritus Professor at UIS, with the degree that took him to Microsoft. Therefore, it’s fitting that he and his wife Ruth created a scholarship honoring Dr. Mims through a gift of appreciated securities. “My Microsoft stock has performed very well, so there’s a large capital gain—but donating it allowed me to avoid that completely … plus I received a tax deduction for the full current value.”

Bill was in farming prior to Microsoft; but when a drought resulted in $50 of bottom-line income, he decided to use his military training in computers to get a job. He realized that continuing his education would further his success, so he came to UIS for a master’s degree. He could take only two classes a semester because of family and work commitments. He progressed rapidly through the program—but when it came time to write a thesis, he hit a roadblock. “I just ran out of steam and literally did not type one word or attend one class for 18 months,” he recalls. That’s when Mims stepped in. “Look,” Bill recalls him saying, “you’re so close to finishing … knuckle down and get it done!”

Finishing his master’s degree allowed Bill to land the job at Microsoft in Franklin, Tennessee, where he rose to consulting practice manager with a multi-state territory and went on to become a senior director. Now retired, Bill is returning to his first love, farming; and he continues to add to the Ted Mims Scholarship Fund. “My master’s degree in computer science made such a difference to me at Microsoft. I’m happy to have the stock to donate to a scholarship in honor of Dr. Mims,” he concludes.